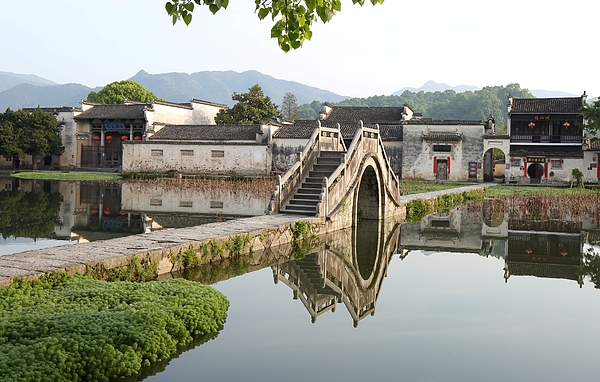 Boundary: Bleed area may not be visible.

Click and drag to re-position the image, if desired.

The image is near the edges of the product but doesn't cover the entire product.   Some of the background color may appear around the outside edges of the image.

Our lightweight, microfiber tapestries are available in three different sizes and feature incredible artwork to complement any wall space. Each tapestry has hemmed edges for secure hanging with nails and/or thumbtacks.

Hong village or Hongcun is a village in Hong Village, Huangshan City, Anhui Province, China, near Mountain Huangshan (a UNESCO World Heritage site and one of China’s main tourist attractions.)The Hong village also became a UNESCO World Heritage Site in 2000 for its exceptional preservation of the architecture and city plan of a rural village in feudal China. Several scenes from the film Crouching Tiger, Hidden Dragon were filmed here in Hong Village and this arched stone bridge is one of the scenes. Photographers and artists love this place for its exceptionally picturesque scenes, as is shown in the crystal clear of the water and reflection of the bridge and houses as well as mountains at the background. This photo was taken on April 24, 2020.

The camera and different types of lenses provide a link to connect all the dots among various things I have learned in my life: art and technology. My interests are sunset, wildlife, and flowers. Having lived in Florida for many years, I came to know so many beautiful birds, their colorful feathers, striking shapes, and numerous species. I am always captivated by the sight of them. Florida flowers are equally amazing and year round. And sunset on the Gulf Coast is spectacular. I want to capture the beauty nature presents us.